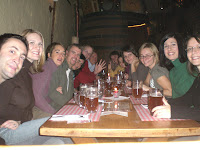 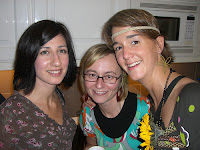 Most of my friends here in Hamburg are international people. The only German representative is Thomas - Txell's (a girl from Barcelona) boyfriend. We all work at Autoliv and often try to come up with some fun during the weekends. Sometimes also during the weeks, although this is much harder. So, the friends are (on the group picture - from the left):
Miguel ("crazy" Mexican guy who is heard easily when he laughs ;-) ), his wife Melody (one of the few ones who don't work at our company), Meritxell (or Txell) - a girl from Barcelona who fell for the German - Thomas (next to her) - he LOVES beer! Then Monica - another girl from the Catalan connection who fell for another German - Rainer (next to her; the longest one in the company). At the back - Dennis - another American guy who used to work with Miguel in Michigan. He fell for a Polish girl in Hamburg - Agnieszka - the first one on the right side. Agnieszka is actually from Gdansk! Next to her - Handan - my Swedish soulmate here! Me. Next to me - Elena (a girl from Romania who works quite much in our plant here). Then Paula - a Brazilian girl who came to be here with Pedro (next to her) who LOVES beer and F1!
The picture is from Gröninger - a HUGE beer cave/restaurant - really good beer and really great place to come to with such a group of people. Wonderful to have you guys here!!! (Guillem & Sveta are missing on that picture; also Cyril - a French guy who has joined the gang recently).

The other picture is from Thomas' birthday party in November. With the theme of the 70's (Handan, Karo and Txell).
Upplagd av Karolina kl. 20.1.08