We finally went skiing!!! On Friday we left work around noon. We took 2 cars and the Beetle team consisted of Handan, Dennis and Karolina. The traffic jam started already with Elbetunnel. Great! We "forgot" it was Friday, and people usually leave work really early. But then we managed to join to the rest of the gang (Melody, Miguel and Katja, Paula and Pedro) close to Magdeburg. After some stops, stau, thick fog in Polish/Czech mountains we arrived to Vrchlabi (if someone tells me that Polish language has only consonants in the words, check the Czech language) and there we met with Lisa and Ales. After checking in we took one beer in the hotel. The weather forecasts were quite bad - and as soon as we woke up there was heavy rain...Great!
Anyway, we packed the stuff and went to our next hotel. We could hardly see any snow on the slopes, the wind was strong and it was raining like hell. We had already plans to go to Prague instead. But at the end, after driving around Strazne and nearby villages, we found one slope Herlikovice which had 2 lifts opened. Yuppi!!! The weather got better and we had a really great skiing.


You can see how tired we were after skiing on the pictre below.

Afterwards we went to the village Spinderluv Mlyn and found some nice pension to stay over night. We were all very hungry and decided to get some proper Czech meal. Although at one moment, it seemed like we wouldn't get much food cause the power went off in the whole village. Thanks God only for a short time.


We were all very tired so 21.30 we were already in beds. We had to get up early on Sunday! And what we saw when we woke up??? SNOWING. A lot! It was beautiful but unfortunately little bit too wet snow and also very very windy.
After packing and some snowball fights we decided to go to another slope to ski.

Unfortunately the conditions were really bad. As soon as we got on the top, there was storm and heavy snow/hail. People who had gogles could ski. But not me. I had ice on my glasses!!! And also the skis which I rented this time were crap, so this time it wasn't so much fun....
Anyway, they closed the lifts around noon due to the storm.
We decided to pack and leave to Dresden (to split the trip this time). After saying Bye to Lisa and Ales, we left to Dresden. It was funny to drive for a while in Poland, especially that last time I was in this part of the country, was loooooong time ago. We arrived to Dresden, dropped Paula and Pedro at the train, and we went out to see downtown and to have a dinner.
Dresden is beautiful!!! The old town is really nice, and somehow there is so much space. Nice promenade at Elbe. Unfortunately we didn't see the inside of Frauenkirche... 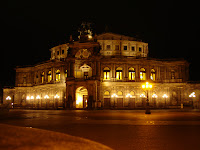 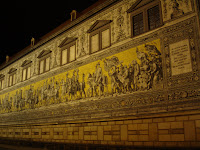 Monday morning we (Dennis, Handan and I) had to leave early to be able to be at work around 13. Yeah right! As soon as we left Dresden, we took a wrong autobahn. So we almost went to Poland again.... So we made extra 200 km or so. But my "bubbla" - that is my Beetle was so good. We were at work around 15. Anyway, this was a short day for all people, since there was a strike in the plant.
The weekend was really nice, great company and fun! Driving ca 1800 km in order to ski maybe 100 km may seem crazy but we enjoyed!!! Looking forward maybe 1 week skiing next year!
Upplagd av Karolina kl. 4.3.08