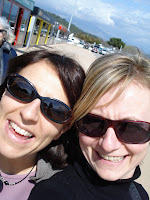 On Tuesday I went with Tania and Dan to Corsica. We decided we needed some sun and warmth and it turned to be a good place. I met Dan at CDG airport in Paris and together we went to Orly. The margin got really narrow but we were lucky and managed to meet Tania at the check in at Orly. Last minute! Puh....
We landed in Ajaccio, sun and +19. Not bad!!!!
It was our starting and ending point. We rented our little VW Polo and went to the hotel. We were super hungry and got some Corsican penne (pasta with Corsican ham and olives). Afterwards we went to the harbor and later on to the main square where we watched people gathering before a procession (religious day in Ajaccio). Few things of our early observations: people over there are small (due to climate? ;-), they are rich (according to the brand clothes), every 3rd person had an Italian jacket with Norwegian flag on, and Birkenstocks. Anyway, we followed the crowd and went to see the cathedral and later on the procession. When they started to go, we decided to take some nice aperitif and beer in one café. We sat near some of the most influential people in Ajaccio (Tania took care of the conversation) and we got some tip what to see, where to eat (well, one place had 100euro dishes; we didn't want to test...). Our dinner was in a very original restaurant in Ajaccio - food and customs like 100 years ago.... The dishes were huge!! Mostly meat, good but it was too late to really enjoy the food. The wine was too cold :-p
Next day we went to Tour de la Parata. Really nice! Sunny and warm!! It felt like we were really on vacations. 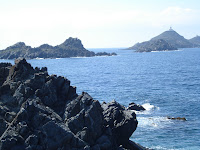 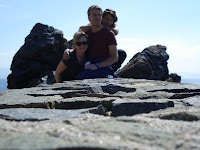 Then we took off towards Bonifacio - South of Corsica. The distance is not that long but the trip took long time due to the mountain crooked roads, and several stops on the way. Namely, stop for Corsican lunch (2 plates, one with chark and one with cheese. Yummi!), stop at some warm natural baths, wine testing (and buying). 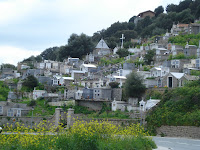 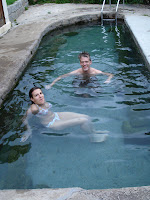 Bonifacio is really beautiful! Right at the coast. See the pictures: 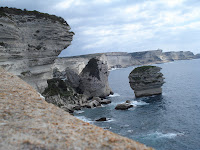 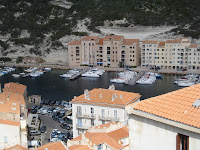 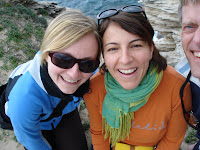 We spent one day over there and afterwards drove to Porto Vecchio. However, we missed some beaches close to Bonifacio and went back the day after. It was really worth it! 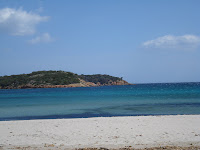 After laying in the sun we went up North from Porto Vecchio to see one waterfall in the mountains. The weather changed dramatically!! The wind was 110km/h, it was raining, mixed with snow. But we were tough and went for 1 hr walk anyway. The pics from this trip will be updated later, when I get them from Dan.

It continued raining the rest of the day and the whole night. Plus the wind. It felt like we were back in the North Europe ;-)
Anyway, we enjoyed nice dinner, nice to see some people out (which wasn't so common during the whole trip).
In the morning we had to drive back to Ajaccio. We drove through the mountains and saw many small, and kind of abandoned villages. It felt like time has just stopped there. What do people do there for living? These villages are probably alive during summer time; now it was different... 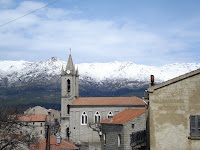 Here you can see Corsica's symbol - the head of the Moor. 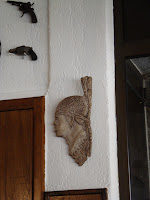 Back in Ajaccio we managed to have some intensive walk in the city hill. We needed that after 5 hrs driving.... Back to the hotel and a nice (actually he best) dinner out. We went also to one bar and saw Corsican youth partying. The noticed difference - young guys drank white wine. Not beer which seems more popular up North in Europe. 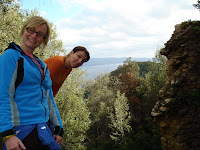 The trip was very nice! Thanks to Dan and Tania!!!
We missed though few things: "svingris", that is wild pigs, and black donkeys. And Easter eggs...
Oh well.... we have to go back some day!

We saw plenty of rosmarin and lavendel :-D
People were super nice and friendly. Gave many tips about places to see. Nice!
Upplagd av Karolina kl. 24.3.08