Last weekend I went with Alex to his cousin's wedding in Aachen (kloster) and wedding party in Vaals in Holland. As it seems to be a rule we had a fantastic weather! The ceremony was both in German and Romanian, also mixture of protestant and ortodox styles. I don't have so many pictures but on the attached one you can see Paula and Thorsten. 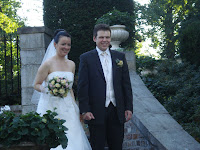 The first night we spent at Paula's & Thorten's place in Aachen. The second night we got to know that we would stay at Alex's aunt's place in Eupen (Belgium). Fine but we had to wait until everybody left and said goodbye and so on in order to drive home. So it took a while.... Totally tired and after driving around Germany-Holland-Belgium in the middle of the night (or early morning) we got home and collapsed in the beds (well I did it).
Then in the morning (ok it was 12.30 but it felt like early morning) the rest of the family came to the house and crashed in the living room where we were sleeping on a matrace in the middle of the room. Everybody was walking around and talking loudly and harding noticing we were sleeping there :-) It felt like Kusturica's movie. I swear. I just got a laughter attack when Alex started playing some Balkan kind of music from his mobile phone.
Anyway, it was fun and nice to meet Alex family.

This weekend is a weekend of bachelor party for Dennis and bachelorette for Agnieszka. The guys are still partying and they had a really full and advanced agenda.
We will go with the girls for a picnic somewhere in the nature tomorrow. So some pictures will follow. Hope wetter.de is right about the weather forecast. Cause for today they said sun and no rain. And guess what....???
Upplagd av Karolina kl. 6.9.08