Again it has been a while I gave you some update. Last weekend I was in Romania. It was nice being in Brasov again, although I forgot how tough the whole trip is. On the way to Bucharest, my plane from Dusseldorf got delayed by 2 hrs! "The crew didn't arrive" was the answer. And when they arrived from Prague, it turned out that the pilot couldn't fly any more since he flew for too many hours that day. Great! So we had to wait for another pilot. I was tired but somehow couldn't sleep on the plane...
We arrived at 00.30 instead of 22.00. Bleeeee
Taxi journey was also a bit unpleasant. Rain and quite many trucks; we arrived around 03.00 to Brasov and I had to wake up Bernd to let me in his apartment. And then I couldn't sleep... Bernd went to work around 8 and I had a meeting at 10 but cannot say that I was totally relaxed and awake. Anyway, Alex arrived later on Friday (after I spent some time downtown) and we went to his dad's place. Nice dinner, some chatt and going to bed.
The day after we met Paul and his girlfriend for lunch (before the wedding). Then we took cab to the groom's house. Cause that's the tradition. The family and some close friends were there. Some music, cakes, food and drinks. Afterwards all of us drove to the godfather's place for some blessing....or whatever they did there. We, the guests were waiting outside, freezing!!! It was damn cold.
Here are the guys/friends Alex used to work with: Paul and Vlad with their girls. 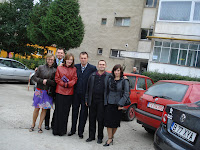 Anyway, after freezing for some while we went to the church. Oh yeah - bride's dad is Hungarian and they live in a town Sfantu Georghie (for sure wrong spelling) 30 km from Brasov. It is a Hugarian town pretty much - quite big minority (or majority) lives there.
So the church service was Hungarian and Romanian mixture.
After the church (I swear the temp. inside was around +5 degrees!!!) we got back to the cars and headed for the restaurant where the wedding party took place.
Well, it is certainly a different tradition than in Sweden or in Poland.
First - people dance almost all the time! Second - there is WAY too much food!!
We started with a champagne and a starter - some ham, cheese, bread, etc. We had some cognac which I drank fast since I had to defrost ;-) And then....a dance! It is cool - people just start dancing and having fun so fast. Anyway, after an hour or two we got the first dish - some fish and potatoes and sallad. I thought this was the main and kind of final dish...but no no.
And then dancing again.
Here - Jo and Paul. 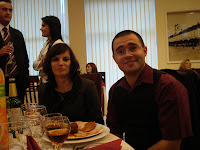 The couple in their Walz. 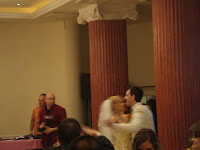 And after some time we got the second dish - famous polenta (mămăligă) and sarmale (cabbage rolls with mince). Mums! But NOT after already so much food... 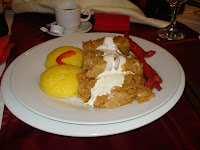 Then dancing and partying again... 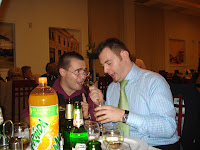 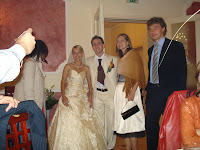 The party finished around 4AM and since Alex and I were not going to Brasov we had to take a taxi to his dad's place. So we got one and as soon as we entered it, I kind of fell asleep. Kind of...cause you can't really sleep on that road ;-) Anyway, I woke up when the taxi stopped and I heard a question which road to take. And somehow we ended up on a sandy, field road in the middle of a corn or whatever field at 04.30 AM. OK.... holes in the road were so deep that I thought we would just loose all the wheels and would have to carry the car. And at the end...we got lost! I mean this road was some road to a farm or whatever. Hmm...ok, now turning back - and we managed to take a wrong sandy field road!!! My God!!! I thought I was having a bad dream and didn't even want to make a mess and yiel. Too tired as well. So at the end we made it back to the asfalt road (that I have no clue why we left at all) and we were at Gelu's place at 5 AM. I hit the bed directly.

Sunday was the departure day. We had breakfast, the weather was beautiful (as usual when I'm leaving Brasov).
A girlfriend of a friend of mine (Carina) and I took the same taxi to the airport. We left in a good time - 4 hours before the plane departure. Normally this trip shouldn't take more than 2,5 hrs. Normally...
As soon as we got out of Brasov and left the first curvy mountain road and got to Predeal we got STOP.
So I could make this picture: 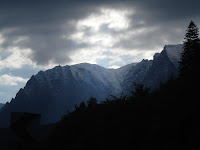 HUUUUUUGE traffic jam!!! We moved super slowly and had no clue how big this line really is. We heard on the radio that there was this traffic due to the end of some folklore festival in Bran (where Dracula's castle is). My God!!! On the distance between Brasov and Sinaia which normally would take us maybe 50 min, this time it took us almost 3,5 hours!!!! We got a bit of panic. Called Lufthansa, got checked in and prayed for making it to the airport. Our taxi driver tried to make his best. And he really did but we really drove more than "Romanian" style ;-) We overtook like 10 cars standing in that line. As soon there was some car movement we accelerated and built a third lane. Between the cars in our line and those which were coming from the opposite direction. Hmmm...quite akward. After Sinaia on a kind of straight road we drove 150km/hr, just blinking with the full (long) lights so cars would let us go. I think people just hated us, showed us the finger and I was thinking of making a sign that we are REALLY in hurry to the airport. Anyway, sweaty and full of adrenaline we made it!!!! The plane got delay of 50 min and that saved us!! amazing!!! Then we just missed the plane in Munich but that's no problem - they rebook you for the next one 45 min later. Once I got on that plane I just fell asleep. I think adrenaline dropped totally.

Now on Sunday a new trip to Brasov for work. Hope this time it will go smoother.
Friday is a day off - German national day so a relaxing weekend is ahead.
Upplagd av Karolina kl. 30.9.08