Oktoberfest (or Wisn' as it is called...)

Time is flying by and I just noticed that it's been 2 weeks since I wrote last time. I try to update this blog at least each weekend but the thing is that not so much happened last weekend. Beside that I fixed some stuff at home, spent half a day with Monica and Raul, watched the movie "Sex and the city", packed and left for a business trip on Sunday late afternoon.
Then I was gone for almost the whole week and on Friday evening I flew for Oktoberfest to Munich.
Alex and Hans picked me up with Hans' rented Mercedes. My God! Monster! I think it was the new S-klass (have to confirm that though) - there was so much space on the back seat that I could almost stretch my whole body and easily sleep. The car almost could make coffee ;-)
Anyway, we met with Sandra and her friend Susi (in whose apartment Alex and I stayed the whole weekend), Hans' friend Björn was there as well. We chatted for a while, had some beers and wine and went to bed.
On Saturday, first we returned this monster car, got some food and then had breakfast in quite a big group. Then Sandra, Hans and Susi put on their traditional Bayerish outfits and we got ready for Okt.fest (which over there is actually called Wisn' or Wissen?). The place is like a fair with lots of food, beers, roller coasters, and other rides, etc. There were quite many people but it wasn't soooo crowded. 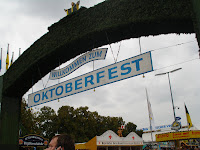 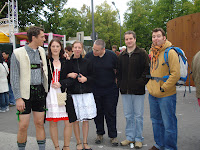 We were lucky and managed to get a table in one place. Ordered 1 liter beers (and radler which is like alsterwasser in Hamburg = beer+sprite). Having good time and enjoying the atmosphere.
Here a traditional hat: 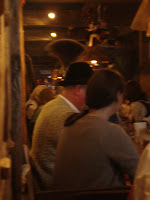 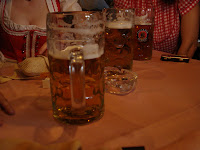 But since this table was booked from 15.00 we had to go out to a beer garden which would be OK if it were a bit warmer....so after another beer we tried to find some free table indoors - forget it!
So the evening finished up in a typical Bayern restaurant with some good food and ...."interesting" bil. For a kind of apfelschorle, they charged us 7euro!!! Separate for juice and water! WHAT?!

On Sunday we had breakfast and then went to English Garden for a walk. And a giant brezel. Mums!!! 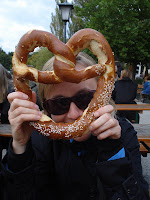 Now back to HH. And the new week is ahead. With my dad's visit here, and going to Romania on Thu evening. Till the next time!
Upplagd av Karolina kl. 21.9.08

it´s called "Wiesn", my dear;)
was a really really nice trip! thanks for these great days.
p.s. probably you could change your blog settings to english. my polish isn´t very good:) however, i think i can guess the meaning of the buttons

HELLO KARA !
WHAT A HUGEEEEEE PRETZEL :)

well - we see you guys had a guys had a good time there! Cant wait until we see eachother in Berlin!.