Goodbye weekend with Miguel and Melody..and other stuff

Last weekend was crazy! We planned to spend it with Miguel, Melody and Katia, and we booked minigolf dor Saturday. First I met with Sandra to buy some presents for the leaving family. Then we met Alex and Hans and had a fika, and in the meantime I received a call from Tunesian consulate that I need to deliver some papers to get the visa. And I had 30 min to fix it!!!!! So I drove with Hans to some bike shop to borrow their fax and I sent those papers. Sandra prepared the presents, and later on we went to minigolf. 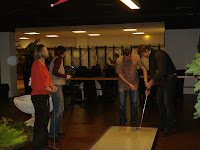 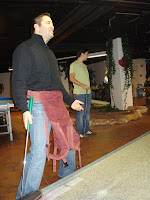 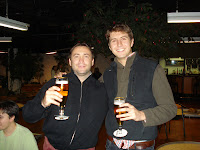 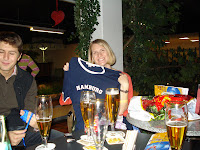 After minigolf we went to Marrakech - a Marrocan restaurant in Altona. When we were booking the tables we said: we will be smth between 8 and 25 people. And guess what?! - at the end we WERE 25!!!
Dennis joined with his American family - 9 people! And then the Catalan connection came as well.
It was loud, food was great, wine even better (thanks Cyril for the choice, and Alex for the extra 3 bottles!). It was really really nice. 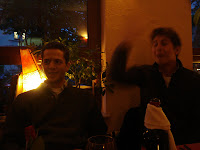 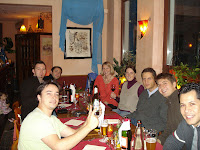 Then we decided to go to one bar to watch Barcelona soccer game. Well...some people watched it, while we were standing outside and having some beers and other stuff from Pedro's "Car bar". We had really good laughs! And although it was cold, late (we had to get up at 5.00 to go to the airport), it was great to be together with Miguel for the last time (until we go to Mexico and party together again). 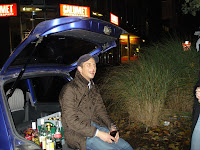 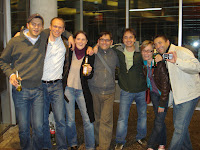 We were at home at 2 and had to get up at 5. Alex and I flew to Romania. I was sleeping almost the whole way....
The week was intensive - plant visits in Romania and Turkey.
I got back Thursday night.
Yesterday Monica, Handan, Sandra and Hans and I went to see "Opera meets Kuba" in a Hamburg Filharmony. It was nice and different with this combination... Here you can see some more info and pictures - Sandra's blog:
http://www.millischeckl.com/

funny pics! :)
i like that one most where i sit in the trunk!