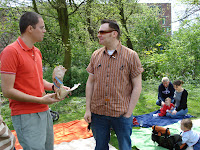 On Sunday we had summer weather in HH. Already some weeks ago we decided that we would make BBQ this day and almost everybody showed up (we missed Dennis - it was his b.day by the way, and Cyril...
Migue's grill beats all grills I know. It is HUGE! And American! ;-)
Thanks to that we could grill a lot at the same time. Of course we didn't lack beer and good moods :-)
Check out the "orange" amigo-team at the grill: 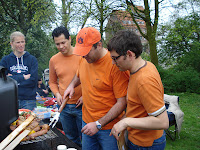 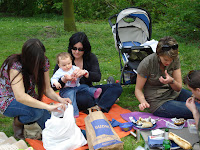 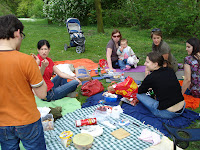 After eating we decided to play a kind of American football. Well....kind of...we were tough and the game was a little bit dangerous ;-)
We had a lot of food (as usual) left and at one point one guy who was sitting a bit from us, came to us and said he would like to buy some food from us, since it smells so good over here.. We just wanted to give him food but he didn't give up and gave us money. Well...we decided that we can manage to have a job in case we may get fired ;-) On the picture you can see how the "business" was running: 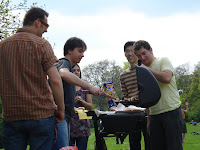