On Thu May 1st, Alex and I went to Göteborg. We drove his car since we had to pick up some cases of beer at the Bordershop in Puttgarten (this was a real adventure!). Anyway, not so far from Hamburg we already got stuck in a STAU due to a motorcycle accident - so already one hour longer trip...Later on we got to the Bordershop - for those who have never heard the word - it is "cheap alcohol paradise". 90% of people are Swedish. And funny - you can buy Swedish beer which has been transported from Swe to Germany, and then you transport it back to Sweden again. I thought that those 10 cases of beer which we had to get were a lot, but no way! People were loading trailers with alcohol. We looked like losers ;-)
Anyway, after shopping, we took the boat to Denmark. We left HH with sun and +18 degrees, we got to Malmö and it was pouring rain and cold in Sweden :-(
We arrived to Dan's place and went out to Götas for a good pizza together with Dan, Magnus, Fredrik and Tommy. Alex got the first introduction to IFK :-D
On Friday we went to Marstrand (Bohuslän in a pill). It was sunny and nice. We walked around the island for some hours, had obligatory fika with kanelbulle. Mums! 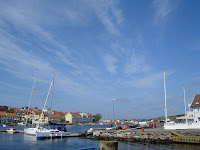 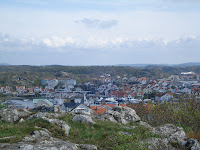 Then driving back to GBG and preparing for grill at the Willquists'. We were quite many since Tania had over her sister with family. Below you can see some pictures from the grill. Theo was so sweet! And cool in his sunglasses, huh? 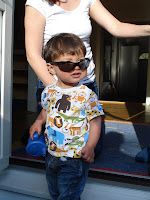 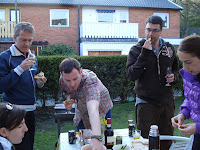 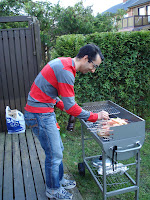 On Saturday it was time to visit the city. We went around from Haga, Vasaplatsen to Götaplatsen with Poseidon, then Kronhusbodarna and Trägårds. 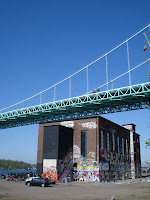 I had some intentions to buy new shoes but didn't succeed :-( Alex liked the city very much. In the evening we had dinner with Christer (he was also working in Brasov when we were there). 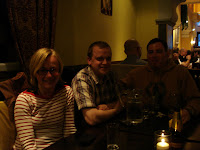 Later on we met Dan for one beer.
Sunday - packing, breakfast and coffee with Dan & Magnus and taking off. 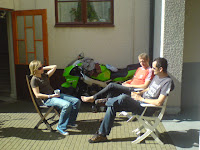 I really didn't want to leave :-((((( It is home over there! And the weather was soooo nice on Sunday (not for driving some hours).
The trip went well until we got to the boat. As soon as we got out of it, there was again STAU in Germany. Grrrr!! And then again before HH. So again the trip took 9,5h... And I know people managed in 7 hrs or so...
Anyway, we had a very nice weekend. The weather was great. Some quality time with my "la familja". I miss it...
Upplagd av Karolina kl. 6.5.08