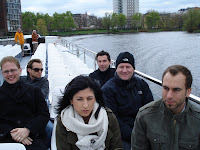 It's been a while since I wrote anything. Last weekend we had an ex-trainee meeting in Berlin.
We were 5 going from Hamburg by car. The trip took over 3 hours (ok, we missed one ausfahrt already close to HH but afterwards it went quite smoothly).
When we arrived Ales and Axel were already at the hotel. We went out for a dinner (a nice restaurant which had Ubahn over the restaurant's roof).
Then Handan and I went back to the hotel, while the guys partied until 5 AM!
Saturday was a sight-seeing day; after breakfast (oh well...almost lunch) we took a boat tour on the river. It was nice, we saw many highlights of Berlin. Later on we had lunch in a restaurant which had many pictures of German history. 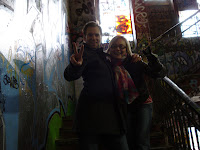 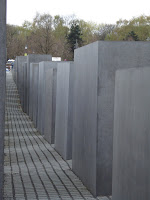 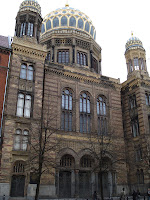 Berlin is amazing - during the last years so many new, mainly glass buildings have popped out...
Mixed with the old architecture it is cool. Also, totally different feeling than in HH; the streets are so wide and there is lots of space somehow. I have to go back one day to see more.... 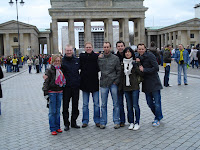 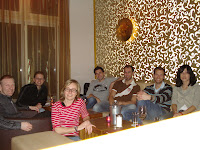 On Sunday we have got some sun and little bit of spring feeling.We went to Kreuzberg which is a multicultural district, had a fika, and later on met also Kico (Kristin's boyfriend) who was in Berlin with his art school. So good to see him again!!!

Sunday evening it got warm and nice. And now during the week it felt finally like we got spring!!!! Alex helped to change my car to summer tyres so that's officially spring! ;-)
Looking forward a nice weekend; there will be one birthday party and grill with multi-culti bunch on Sunday.
Upplagd av Karolina kl. 24.4.08