Yes it is true. We had 0C one day and +15C the other one. Crazy!!! Last week, I think on Tue, it was +21C. But now the weather seems to be more like it should be in March/April...
Last weekend Alex came home. On Saturday first we celebrated Naroz (Persian New Year) with Handan and Hamid. Well...celebrated is maybe too much to say but Alex read about it on Wikipedia and prepared the needed dishes/things that should be present on the table during the celebration. After that we went for a farewell party to Jenny's&Johan's place. It was their and Kazuhiro's party. Manye friends there, really nice. Although a sad reason for a party - we are getting a smaller group here :(
On Sunday we went for a couple of hours to Guillem's and Sveta's place since Guillem prepared a goodbye paella for Kazuhiro.
It was such a nice day. Paella was also great! :) 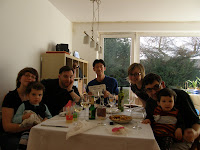 Then the evening came, Alex got a ride back to the airport. The week was work, some fitness (too little), ordering some stuff on internet and still not receiving that. Short day on Friday since I went to Poland for this weekend.
It was very nice, my mom's brother with his daughter visited also. Cool! We had some fun, little bit chaotic since I had some necessary points on my agenda as well ;) Went also with my mom to a fitness place and after 1 hr on step I can feel all my muscles now - me, who thought I was so fit!!! Have to start taking some sport passes again and not only those cardio machines...