Again - some delay with updates... But I´ve been away a lot recently.
First - Easter in Madrid. I went already on the 1st April - flying via Paris (CDG!). I arrived to Filip´s place and after 1 hour met with Txell and Thomas at Gran Via.
We decided to have some snack - meaning tapas nearby and then wait for Alex to arrive.
I think we´ve got the cheapest tapas and beer ever! 7€ for 6 beers and bunch of yummi tapas!
Then we went to a cerveceria next to Filip´s place and waited for Alex. Afterwards some cheese and jamon together.
The next day we met half way between their hotel and Filip´s flat and we followed the "green path" which Txell´s guidebook suggested take.
A lot of small and cozy streets. Nice old pharmacy - as on the pics. 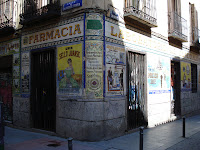 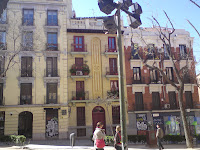 After walking for some time, we decided to have lunch (Spanish time - around 15.00) in a really cool and famous place. It was sooooo good. We ate so much that we could hardly walk ;-)
That´s the place: 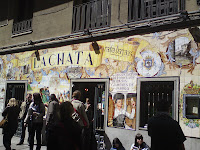 Then again, walking around Plaza Mayor and the neighborhood.
We watched also a Good Friday procession - there were quite many that day around the city.
Afterwards we went to the Egyptian Temple to watch the sunset. Overthere we met also with Txell´s and Thomas´ friends - a Catalan-Irish couple. 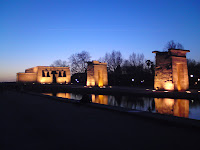 Then we had a tapas dinner at Casa Granada - a place recommended by our friend Ralph who was supposed to be there at 23. It turned out he meant at 11.00 next day. Anyway the food was nice! Just a bit odd place to find...

The day after we did a bit of shopping and went to the Park close to el Prado museum. Then Alex and I were supposed to meet Ralph. At the end we succeeded ;) And we also went to the Reina Sophia Museum - Contemporary Art Museum.
Pity cause that day we had quite much rain...

At night Txell and I went to the church - for Easter mass, and then we had a dinner together with Ralph and his girlfriend. Again around 23.00. Not bad, huh? 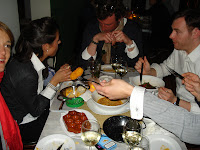 After the dinner we went to some "underground" bars to listen to flamenco singers/players. A bar totally covered in smoke, with Gitanos singing and playing guitar. Unique. 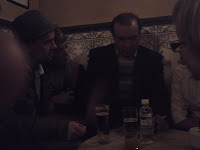 Morning after was a bit hard... But we managed to get to the market in La Latina. Met other friends of Txell and strolled around La Latina district, incl. lunch at a nice vegeterian place.
Afterwards we just laid in sun, and then walked with Ralph around some parks. 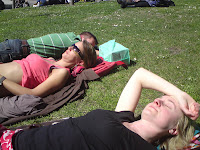 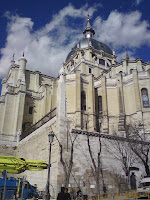 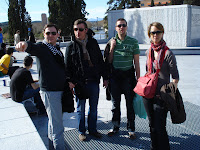 We also participated in an international pillow fight - well only two friends of Ralph showed up with their pillows and we took the advantage of it ;)
(at Cervantes, Don Quijote memorial). 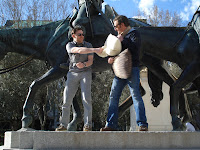 We had very nice holidays and we have to repeat it again. I´m also glad we managed to meet with Filip who came back home to Madrid on Sunday night.

After returning to HH, I had one day at work and then went to work to our plant in Hungary. And spent the weekend in Budapest. We had 19C everyday - it felt like summer.

Saturday was a bit sad due to the news about the plane crash with the Polish President, his wife and over 90 representatives from the government, army, church, sport, etc. May they rest in peace.
Upplagd av Karolina kl. 11.4.10