My God! Already 6th Jan!! And such a long break in updates...
So much has happened that I don't know where to start ;-)
Well, December passed by fast. I had only 10 working days here in Germany. Then 5 days of holidays in Göteborg (incl. Petra's & Magnus daughter's baptism), meeting friends, looking for apartments, the usual stuff ;)
GBG looked more less like that: 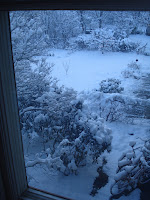 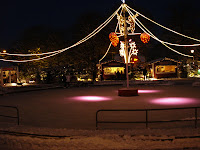 Trip back to HH was already a bit of an adventure, since my plane got cancelled! Technical problems they said..So got rerouted via Frankfurt and was in HH on Sun evening instead of noon. Oh well.

Then my business trip to Tallinn. There was so much snow over there! Work was fine. In the evening we went out for a dinner and saw a local Xmas market. They had glögg! :) 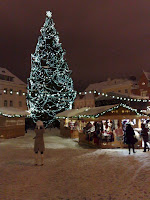 On the way back to HH, I made it to Copenhagen first. Was supposed to fly back to HH around 21.00. At 21.10 they said 23.10. OK...a bit of reading, eating smth, fine. Boarding started before 23. As soon as I sat down I fell asleep. Woke up after ca 45 min ready to get out of the plane but the pilot actually announced that we had to go back to the terminal, since HH airport is closing at 24. What?!!? We never took off!! So the adventure started. First lining up to get a voucher for a taxi and hotel in CPH, together with many complaining Germans. Then lining up for a cab together with 10000 other travellers whose flights got cancelled. Crap weather, midnight, tired.
Shared cab with 2 other guys. As soon as we got to the hotel we went straight away to the computers to buy train tickets to HH for the day after (at the airport they couldn't guarantee that we would get seats to HH for Saturday). Waiting for ages for ticket print-outs since there were many people getting rooms and only 1 poor guy in the reception.
Went to bed after 02. Got up early. Nice thing - Danish breakfast! Mums!!!!
Met a funny guy from Uruguay who was also going to HH so we had a bit of fun with one German and the Uruguay guy.

Got back to the apartment in HH on Sat at 16. Yoohoo! Now repacking and leaving to Poland on Sun afternoon... Didn't even manage to do laundry.

Trip to Poland - only 3 hrs delay. Peanuts! I was so immune that actually had fun and time passed by fast. Met a Mexican guy who was going to visit some friends in Poland. It was fun to teach him a bit of Polish :) And have some tea with 3 other Poles.

Few days in Gdynia passed quite fast. Filip arrived on Thu night and on Fri we took off to celebrate Xmas. Xmas was nice, a bit chaos, presents, lots of snow.
And tons of food!

Then went to Romania. Spent night before flight in a hotel opposite from the airport in Poznan. Didn't want to risk to miss the flight early in the morning.
Flight was a bit delayed to Munich. So I had to run in Munich to catch my flight to Bucharest. Puh! Hardly made it! But did it! :) However, my luggage didn't make it :(
I got it anyway the day after. And funny - the guys who came with the bags made a meeting point at MacDonald's - so all people from Brasov and nearby could come to pick the bags up... There were so many people!!! Amazing!!
We had fun in BV, stayed at Alex dad's place. We were in the city, went to some pub for quizz. Then we went to Sibiu before New Year's eve and visited Alex' friends. And New Year's Eve celebration was in a village outside of Sibiu.
A different kind of party that we were used to ;) But anyway funny to see how people celebrated. 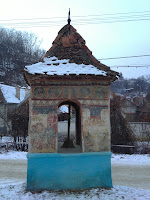 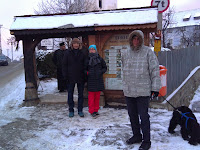 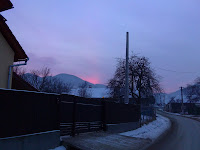 Trip back went fine. Well we had two different flights but we cmae home safe and fine. With all luggage.
Now the first week at work has passed. Happy New Year to all of you!!! Hope it's gonna be a great one!!
Upplagd av Karolina kl. 6.1.11