I went to visit Alex in Budapest this weekend. Since he is going to be there for a while I better get used to some travels to the land of "Bratanki" (Polish expression - somehow Poles and Hungarians are supposed to be buddies).
Anyway, the first impression of the city - airport's location sucks! ;-) It is placed in a valley which apparently often has a bad weather. So was the case on Fri evening - we couldn't land due to a heavy fog (we were cruising above the city for 1,5hr - around 10-111PM!!!). There was already a risk that we would have to land in another city which I just didn't want to hear about!!
Anyway we got to Alex' place around 1AM...Oh well. The house he lives in is nice in a very quiet and cosy area.
Saturday - we did some sightseeing in the city, had fika, returned Alex' rental car etc.
Actually I didn't have any tight agenda when it comes to MUST see. Since there is going to be more times over there...
I like the bridges in that city! Actually it is a nice city, with old and great architecture. The Parliament building is very nice, especially with the lights in the evening. 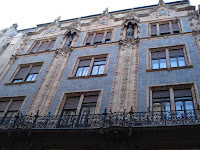 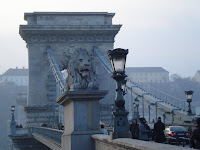 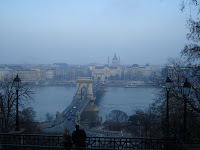 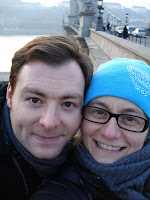 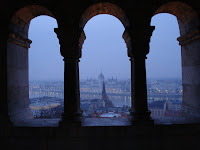 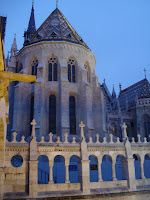 In the evening we met with Alex' colleague and had dinner together in a local restaurant. Nice. Except maybe the fact that all restaurants and public places smell a bit like eternal "frying action". Really!

Sunday, after sleeping in, we went for brunch. And since it was in a huge mall, we decided to go to the movie theater to see anything which wasn't dubbed ;-) And we saw a great movie called The Imaginarium of Doctor Parnassus. Really nice!!

That's how the weekend passed. I was leaving really early this morning and we had "only" 1hr delay. Due to only one de-icing machine at the airport.
We will see how the next trips will be.
Upplagd av Karolina kl. 18.1.10

I like BUDAPEST (but every time i went there it was a business trip and did not really see the city ( only from the Taxi so it does not count) and cant wait to go there together with Gary and Max; It will probably be may or June - hope Alek will still be there... We must schedule some "GET TOGETHER"... Still we got to visit Hamburg as well... there is only one question- WHEN???

Sure you have to visit Budapest. Maybe as you say in May or June. Then the weather should be really nice over there. Hamburg - well maybe end of May?