From the 27th dec until 3rd Jan we were in Marbella. Or rather stayed in Costa Bella thanks to our friend Ralph. We flew from Berlin to Malaga, then rented a Fiat and drove to Costa Bella.
The first day was pretty much sleeping in and then visiting Marbella. Rainy as you can see. 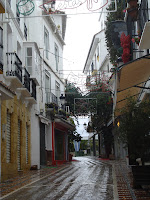 The next day we decided to visit Sevilla. Wow! The traffic to get into the city!!! We lost probably 1 hr just there... Still raining but we don't give up. A nice city, we also saw some sculptures of A.Rodin which were spread around the city. We had some tapas, walked around, took pictures and then drove back to Marbella. 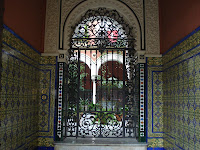 I didn't see any flamenco performance but the signs of that you can see around the city. 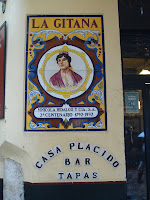 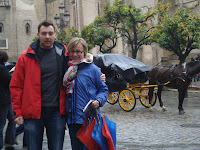 The third day was an attempt to go to Gibraltar. 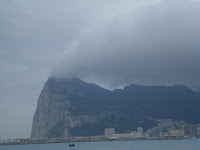 Guess who didn't take the passport!!! Well we have completely ignored the fact that it is a British territory. Alex had at least his ID, I had my Swedish driver's license which works....in Schengen! Oh well...I got so angry that they didn't let us in that we never got back ;-) Anyway, it was cloudy and windy and grey so we went to Tarifa instead. And that was the greatest choice!!!
Tarifa is a beautiful small surfing town. So chilled and nice. And it was soooo sunny when we got there!!! The beach was great! Really windy - check out the sand movement on the last picture. 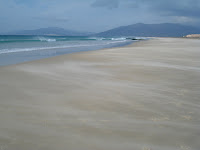 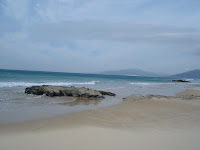 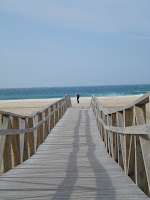 From the beach we went to the old part of town. So nice! Many small narrow streets, all houses white, so cozy and magic in a way. 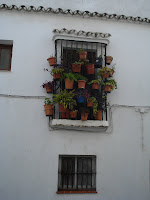 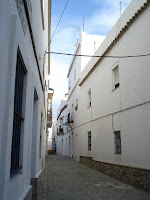 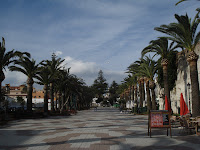 The next day was the New Year's eve. We went to Malaga, walked around, had some coffee and then we met Ralph and his two friends who came to Marbella for New Year's eve party. After staying in Malaga until late evening, we went home, and were supposed to leave at 21.30 for a dinner, then to some clubs. If you see the time on the clock below you can see that things turned to be a bit different...We left home around 23. Got to one restaurant in Marbella's harbor and got our food right before midnight. Not bad! Then champagne and then some clubs around harbor. It was nice. But different than usual celebration.
Here you can see Alex and Ralph in one bar in Malaga. And getting ready at home. 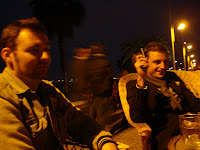 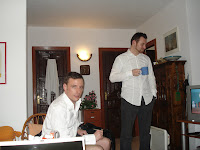 On New Year's day I woke up the 1st one and went up on the terrace to lay down in the sun and read my book. Sunny day, +20 degrees, beautiful. Then Alex and I had a long walk on the beach. The beach was so crowded. I guess everybody wanted to cure the hangover with fresh air and the breeze from the sea. 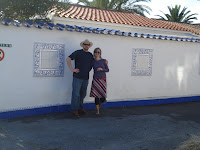 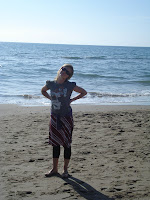 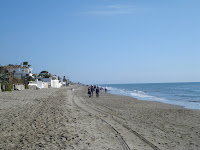 Then we had a lunch at the terrace. Gregor (Ralph's friend) made a Bayerish breakfast. I think we all needed some calories after the previous night.

Then we walked with Ralph along the beach to a nearby restaurant to have some shrimps and later on to pick up our rental car which we left in Marbella. 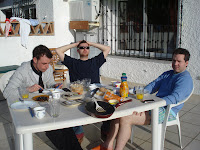 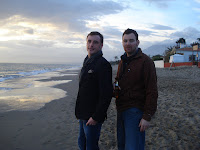 The last day we went to Ronda. It is only ca 50 km from Marbella but you have to cross the mountains to get there. And the road made me sick. Well almost....but my stomach was turned upside down ;-) This town is famous for bull fighting, however we were not interested in that. The old part is nice, the entrance bridge majestic. 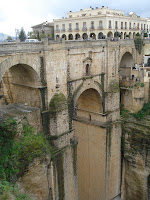 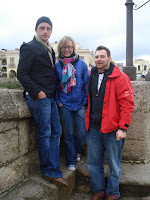 The trip was great and we enjoyed it a lot! Mosaics, narrow streets, white towns, beaches and the waves. Good food, good company, good wine ;-)
The "only" "problem" was when Alex's car didn't start on Sat. night when we got back to Berlin. But the battery problem is solved now and the car is now in HH.
Upplagd av Karolina kl. 8.1.09

I know I know ;-) Next time we are going all together! /K