...EM I mean. Football's mania. Punkt slut. I can only tell you that I was reaaaaaaallly glad that Spain won. The Germans were just too convinced they would win.... Already the game against Turkey was so so, and I was hoping that Turkey and Russia would meet in the final (European Championship, huh?). But OK, Spain won, they played better That's it.
We were 15 people watching the game at Handan's place; kind of equally divided into those cheering for Spain and those cheering for Germany (yeah well we had those as well ;-)
Anyway, we were probably the only ones screaming when Spain won. Handan is probably hated by her neighbors now ;-)
Here are some pictures of the gang (from the right: Johan and below Jenny - a Swedish couple; Roseline - Sweden; her French colleague; Sveta (Guillem's wife); Sandra (German); Guillem and Alex). 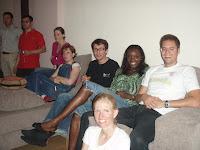 Here you can also see (from the left): Miguel (Mex) and Hans (Austria). 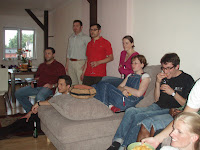 On Saturday evening we went to some friends' birthday party. There were 80 people!!!! The party was perfectly organized (Germans...). And it was very nice. We were out in the garden the whole evening. Well almost the whole one. Afterwards Alex was supposed to be a DJ with some funk music and the music was great, just not for dancing. So Monica (from Barcelona) who wanted to have some salsa wasn't so happy ;-) Anyway, at the end we managed to find somewhere Shakira, Gypsy Kings so people could dance. The trip back took over 1 hr. God we were tired!!! At 03.30 at home - it was getting light...
Sunday was little bit hard but a nap in the afternoon helped.
Now the new week has started. Alex left for Romania today and will be back in 2 weeks more less. Next week I'll start preparing a bit for moving. At least start packing a little... Hope we can manage to move before Magda's wedding.
All of you who read this - have a good week!
Upplagd av Karolina kl. 30.6.08