Wow....so much has happened since I blogged last time... I mean in the world. First the war in Libya. Or actually first riots in Egypt - where at least they succeeded that Mubarak gave up. In Libya it doesn't seem to go so fast though. Then tsunami, Earthquake and nuclear catastrophy in Japan. Poor people...It's awful what happens in the World, especially when Mother Nature "gets angry"..

Otherwise things here are OK. Most of the time is filled in by work and daily activities, following hemnet website and checking apartments for sale in GBG, bidding, not getting the flat... :( OK, there is still some time left until we go back to Sweden but time is running fast... Hope soon an apartment can be bought.

This weekend we had a wonderful weather. SUN!!! OK, a bit cold, expecially when it was windy, but still spring is almost here. Actually in the South of Germany they had already 18C. Yesterday we biked to Elbe and had a long walk there. And a bit crazy photo session ;-)

Well Alex kind of succeeded this picture of me: 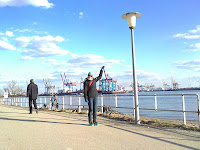 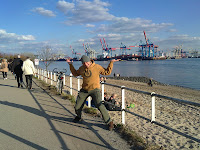 Then in the evening we celebrated the Earth Hour - switched off lights and all devices from power, had candles on and played "Memory". Actually quite fun and a different Sat night.

Today we went to Lubeck. Had some marcepan (of course), walked around, took some pictures. A nice town (before I've only been at the train station, or at the small airport near Lubeck) with the typical Hansiatic architecture. 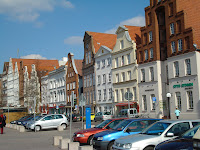 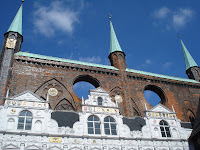 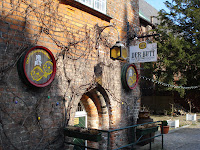 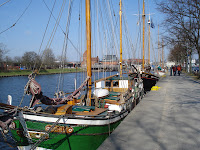 Now Monday tomorrow. In one week 2 days in Sweden, which may get a longer stay depending if there is any chance to see (and buy!) an apartment.
Upplagd av Karolina kl. 27.3.11