It feels bad to update this blog only during weekends. I should probably be more politically or culturally active but I really have no time during the weekdays...
Last week there was Balett-week in HH. I REALLY wanted to go and see some of the performance but the only one I could get the tickets for, had only poor-visibility seats left. Monica and I decided to skip it and then after checking the website we noticed that we could buy the tickets for some Russian Balett for September. So we did it!!! Yuppi!!!

As some of you know I'm planning to visit Filip in China at the end of September. But again, there is a "project" - visa. Both Alex and I tried to call the Chinese consulate at least 15 times but without any success.. So after sending them email I got to know their opening times. I wrote this kind of "giving the right" letter and asked Alex to go and leave my visa application on Friday. And guess what?! After checking the date of my departure they concluded: Come back in August. WHAT?!?! Oh well, I guess I will try to fix it again in 10 days or so.

The whole weekend was relaxed and nice. I wanted to go the Miniature World - a city made of miniatures - people who saw it said it was great! But we somehow didn't make it... We were in Schanze and discovered a new restaurant, actually owned by a famous German cook. I think the service still needs improvements; the same when it comes to food. But it is a cool place. And their chocolate cake and apple pie are great!!

Today Alex left around 12, and I went with Sandra, Hans and their friend Claudia to St. Pauli for a "fischbrötchen". Mums!!! It was a very nice place, Brucken 10; interior design done by a famous HH-artist. Check it out: 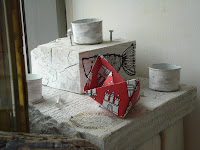 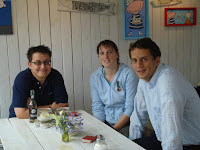 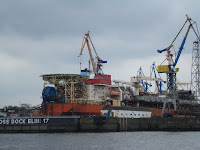 Afterwards we walked a bit around St.Pauli - went to see the shop of this artist who decorated Brucke 10.

Sandra really wanted to have the chocolate cake from the place we went to yesterday. So we did that. And the apple pie was also yummi!!! 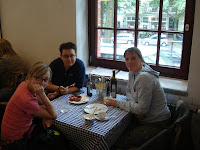