During the weekend we went to Århus. Filip was there together with some friends and we decided to meet them. The drive is only 3,5 hrs so not too bad. We met with Filip and Olivier on Fri evening, ate a bit and had some drinks. All of us agreed that in Denmark drinks don't have so much alcohol... And so much more expensive than Germany!!! I have already forgotten that...
Anyway, we just had a "soft" evening to spare the energy for Saturday.
On Sat we did some shopping, went around the town and didn't do anything too demanding.

Here, the three amigos waiting for me to get out of a Danish design shop :-) 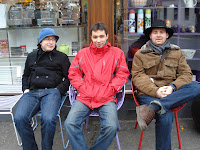 We saw a duck couple trying to get to one restaurant. While we were convincing them not to get there since they may become a dinner, one waiter came out and told us that this is normal. Those ducks just come everyday to get some food! Since, the restaurant is at the channel they don't have a long way for dinner :-) 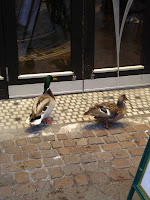 After 1 hr power nap we went out to eat and to have some drinks. There is this quite cool bar called Fidel's - opposite from our hotel so we spent some time over there. We met some other international guys from Filip's company and for once talks around the table weren't about seatbelts, but wind turbines :-)

We stayed out quite long and this morning I had to get up really early to meet with Ulrika (my one year roommate from the US times) and her family. It's been more than 5 years since we met last time!! We had brunch together and talked a lot about updates. Later on Filip and Olivier joined us, we had a walk and drove back home in the afternoon.
The weekend was nice, too bad no spring weather in Århus. Contrary to HH ;-)
Upplagd av Karolina kl. 15.3.09